Edit
watch 01:36
We're Getting Mutants in the MCU - The Loop
Do you like this video?
Play Sound

Airsoft magazines are devices in which Airsoft Guns hold their ammunition, Airsoft BB's.

Also known as Real Capacity Magazines, are airsoft magazines designed for the most realistic effect. They usually contain the same amount of rounds as their real steel counterpart would contain (For example, a T91 STANAG Magazine holds 30 5.56 cartridges, so a Real-cap replica would hold 30 Airsoft BB's). BB's are fed into these magazines from the top feeding lip or orfice and feed using an internal spring, pushing up ammunition as BB's are spent.

Usually found in AEG's, Mid-Caps, also known as Mid Capasity Magazines, are airsoft magasines designed for the best performance. The Mid-Cap magazine is popular due to the relatively high amount of rounds the magazine can contain, without having to wind the magazine, or having to deal with a noisy magazine. The Mid-Cap magazine generally hold more than the Low-Cap magazines, up until the mid hundreds. BB's are fed into these magazines from the top feeding lip and feed using an internal spring.

High-Caps, also known as High Capacity Magazines, are airsoft magasines designed with maximum carrying capacity in mind. There are three types of High-Caps:

The Common High-Cap Magazines, often found in AEG's, unlike Real-, Low- and Mid-Caps, are relying on feeding via a winding weel located on the bottom of the magazine, instead of a spring. The capacity of High-Caps vary a lot from replica to replica. And unlike its predecessors, the High-Cap magazine is fed BB's through a trapdoor, into a reservoir leading to the winding wheel.

The Flash Magazines, originally made by airsoft company Lonex, are very similar to Common High-Cap magazines, but instead of operating a protruding winding wheel, the Flash magazine has a trap door on the bottom of the magazine, which, when opened, reveals a steel wire pull-string, which engages the winding wheel. This method vastly decreases the time used on making the magazine feed.

The Self Winding Box Magazines, often found in machine guns, essentially works in the same way as the other High-Cap magazines, but the action is operated using electronic equipment.

Found in gas operated airsoft replicas, Gas Magazines are spring feeding magazines, which also carry propellant. A gas reservoir located in the magazine uses high-pressure gas (typically CO2 or Propane) to act as a spring, pushing up BB's when firing. 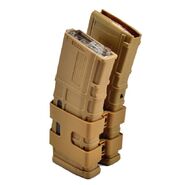